TVS, India is gearing up with its new 250cc bike to its Apache lineup. Recently we are hearing new regarding the partner ship of South India based two wheelers manufacturer TVS Bikes and German bike maker BMW Motorrad. Reports states that these companies are trying for the development of performance motorcycles having engine displacements less than 650cc. Today, we got reports of the first bike under this giant partnership and it is is expected to arrive in 2014 with an engine capacity of 250cc. This new Apache RTR 250 from TVS BMW Motorrad is being developed with huge inputs from TVS Racing, the racing division of TVS Motors. We all know about the craze of Apache series of bikes in the Indian bike segment and these motorcycles are to be a potent challenger to the Bajaj Pulsar series. No clues regarding the new TVS Apache RTR 250 price in the country but it is is expected to come with a sticker price of lesser than INR 1.3 Lakhs. 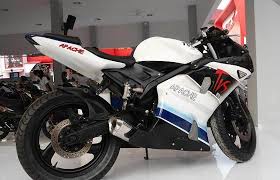 We can expect the bike with powerful performance along with decent handling and ride quality. This flagship motorcycle for the company has started its initial testing at the VRDE (Vehicle Research and Development Establishment) facility in Ahmednagar, Maharashtra. You can expect the launch of this power bike during the 2014-15 fiscal year. Reports reveals that the TVS is planning to introduce this bigger and sportier version in full faired as well as naked versions. The bike is hearted by an oil-cooled engine with fuel injection system instead of a liquid-cooled engine. Well, this new engine is capable to produce 25 BHP of power and 20 Nm of torque. You can also expect for better safety and effective braking system in this new Apache version. The TVS will offer ABS along with twin petal disc brakes as standard.

With the launch of this sport version, the TVS will compete with much more  accomplished rivals in the Indian market like Bajaj Auto, KTM and Honda. TVS Apache RTR 250 features with six speed transmission and alloy wheels with 6 spokes. Most of reports claims that the bike have a good fuel economy with a top speed of about 150 to 160kmph. As similar with the older sibling, this bike is likely to be available in four different colors to choose from white, grey, yellow and black. It is reported that the suspension in front comes with telescopic forks and coming to the rear suspension it will offer a rectangular swing arm variety. Soon, the TVS is also planning to introduce a new 125cc automatic scooter and the all new Victor motorcycle soon. You can have a look at the TVS Apache RTR 250 pictures to get more details regarding the external looks. TVS Wego is also now powered by disc brakes to offer a better controlling capability.
Posted by Dinesh at Wednesday, May 29, 2013