The Austrian two-wheeler manufacturer is well-known in India and the reason behind its huge fame just after the only bike it launched, KTM Duke 200, the bike's robust nature. KTM Bikes have been in the process from where they will to cover a long way, however, the very first bike from KTM has cleared the company's intentions that how they are planning to rule the Indian bike market. Now, as our reliable sources stated that the middle-weight marvel from Bajaj-KTM joint venture, has been spotted doing a test run in Pune by Yogesh Naik.

KTM Duke 390 Features a very efficient duo suspensions. The front suspension is equipped with WP upside down while at the back, there is WP suspension mono-shock to give you a luxurious ride even if you go off-road quite often. In terms of speed, the new naked-bike from KTM, Duke 390 has the choleric speed of 150 km/h and it reaches up to the speed of 0-100 in a quick time span of just 7 seconds. The reigns of such agitating speed can only be held well by a very sturdy braking system and to make it come true, the front brake is powered by 300 mm disc and at the rear, there is 230 mm disc to offer you a ride full of safety.

KTM Duke 390 shows a single-cylinder, liquid-cooled, DOHC engine with 373.2 cc displacement. The four-stroke and 4 valve engine pumps out the peak power production of 44 bhp at 9500 rpm and the maximum torque the engine delivers, is 35 Nm @ 7250 rpm. The healthy power and torque provides the bike an extra force which is reflected while touring. All the massive power goes via a belt to a 6 speed manual transmission which has one down and five gears shift pattern while the gear-shifting has been built smooth and cursive for hindrance free riding. KTM India making a stronger place in the country. 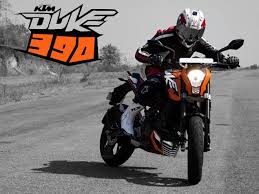 KTM Duke 390 Price is one of its shortcomings. The bike falls between a very incompetent and unaffordable price bracket of Rs. 1,90,000 (Ex-Showroom, New Delhi). The price has not been kept keeping the price conscious buyers of the nation in mind. KTM Duke 390 Pictures a design which is amazing. This bike is one of the best examples of naked bikes in terms of looks and styling which must count for something. The new KTM 390 Duke is up for its economic fuel-efficiency, great styling and looks while the slightly high price of the bike is one of its drawbacks.
Posted by Dinesh at Thursday, April 04, 2013